Continuing the conversation from last week – we talked about the lower number of alcohol-related fatalities in New Mexico – from 191 deaths in 2006 to 139 deaths in 2010.  A more complete picture of the status of DWI crash deaths in New Mexico is revealed in the percentage of all fatal crashes involving alcohol. The percent of all alcohol-related crash deaths has remained constant – 40 percent – over the past five years.

New Mexico experienced declines (1989 thru 1998) in not only the number of people killed in alcohol-related crashes but also the percentage of DWI deaths reflected a downward trend. There were landmark policy changes made in 1993 that reflects the impact of DWI policy in reducing DWI crashes. From 1999 through 2010, there has been no progress in reducing the percent of alcohol involved deaths, hovering at the 40 percent level.  New Mexico also was experiencing a decline in non-DWI-related deaths as much as decline in DWI-related deaths.  We would conclude that the DWI policies since 1999 appear to have virtually little to no effect in reducing the DWI-related deaths in New Mexico. 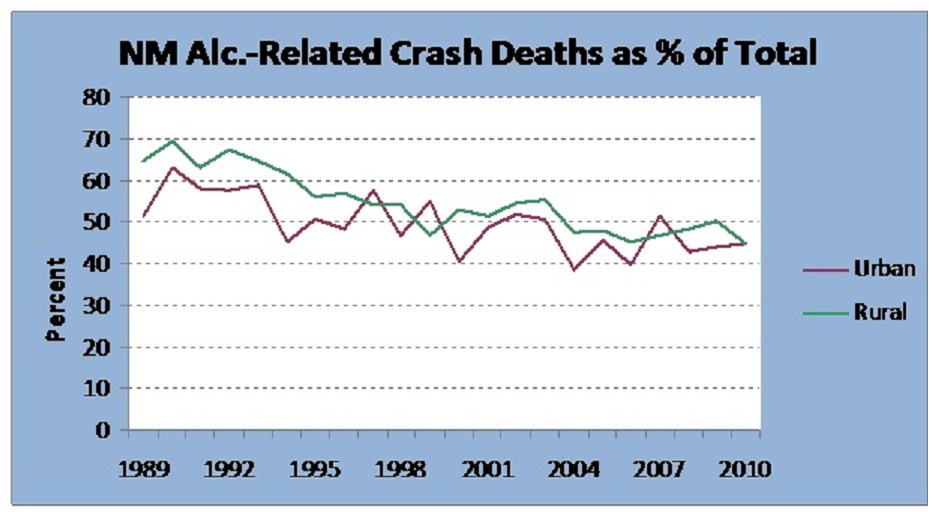 The research has been very solid on what reduces DWI death and injury – detecting and arresting DWI offenders and fully prosecuting these offenders. The courts need to sentence meaningful sanctions and then follow up that the sanctions imposed are completed by the offender. So, our first line of defense in saving lives is enforcement and what we have experienced is a steady decline in DWI arrests per capita.  There is the reality of other pressures, priorities and resources law enforcement agencies have experienced during this decline and the reality that many agencies became increasingly dependent on increases in federal funding. The drastic drop in DWI arrests seen in 2010 was, in large part, due to the Albuquerque DWI enforcement reductions.

The state has seen reductions in the DWI conviction rates as well.  In the most recent annual report on DWI court dispositions in New Mexico published by the Administrative Office of the Courts (AOC) (http://www.nmcourts.gov/dwi_reports/2010dwicourtdispositions.pdf), the conviction rates in all the courts – District, Magistrate, Municipal have declined, however in Metro Court they slightly increased  from 64 percent in 2005 to 67 percent in 2009. What was interesting was the percentage of these dismissals was attributed to the prosecutor.

In reading the about the sanctions imposed found in the New Mexico DWI Offender Characteristics and Recidivism Report 2000 – 2007[1], it begs the question, are these really meaningful sanctions?

Probation, DWI school, and victim impact panels have historically been the most frequently

assigned sanctions. In the past several years, however, new sanctions have emerged. Since 2002, ignition interlock, and, since 2004, community service have been used with increasing frequency, and are now among the most common sanctions. Also starting in 2004 driver’s license revocation began a more gradual increase in use as a sanction, and in 2006 was used for 11% of offenders.

The re-arrest rate of DWI offenders is generally 18 percent (from last conviction to next arrest within a three year period).

Overall, in order for New Mexico to experience the reductions of DWI death and injury, I will be discussing the policies and systemic changes that deserve serious consideration.

Next week I will discuss New Mexico’s beloved ignition interlock – the facts, the research and the future.

By three methods we may learn wisdom: First, by reflection, which is noblest; Second, by imitation, which is easiest; and third by experience, which is the bitterest.
– Confucius

Want to join the discussion?
Feel free to contribute!

This site uses Akismet to reduce spam. Learn how your comment data is processed.

Contact us to discuss sponsorship.
New Mexico ranked 11th in total car crashes; reported crash death rates dec... Will the ignition interlock law save us from ourselves? Part 1
Scroll to top